OSCAR MARCELINO: A GEM AMID OUR BASEBALL DIAMONDS
by Jodi Jonis
June 21, 2017

Back in the farthest corner of the SAS campus on the SAS baseball diamonds, you’re likely to find a gem of an altogether different sort in the form of coach Oscar Marcelino. Marcelino has been our baseball coach for CSA (formerly SACAC) for the last 13 years and his coaching style happens to support some of our school’s highest values: character, service, community, cultural competence, and baseball. Okay, maybe baseball isn’t officially on the list of DSLOs (desired student  learning outcomes) but it has been the critical element in his life through which Marcelino has developed all these traits and he uses it to create and give back to his communities.

For the last five years, Marcelino has been collecting used baseball gear from the baseball community in Singapore and giving it a second life by donating to communities that desperately need equipment in the Philippines. Almost all of the donated items come from the SAS community. Marcelino said, “These parents are so generous, they give us so much! They give their bats, shoes, gloves, old uniforms, everything.” He also collects non-baseball clothes as well because there will always be brothers or sisters who need something. He takes anything and everything, and in any condition, explaining that for kids who have nothing there’s plenty of life left in even the oldest pair of cleats. 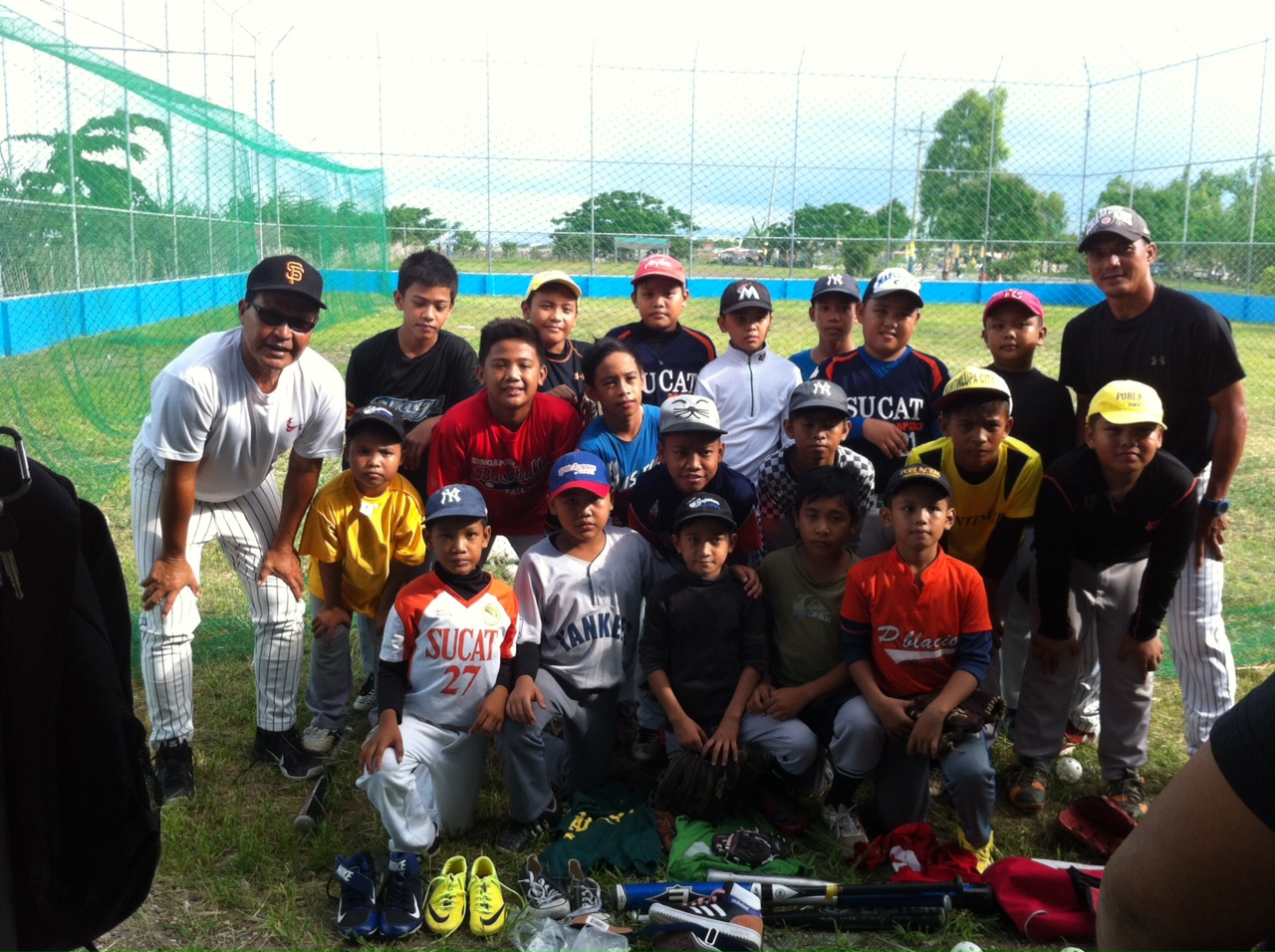 When the school year ends, Marcelino heads to the Philippines and starts sorting. Once all the caps, gloves, and jerseys have been organized and every shoe has its mate, the piles of gear are ready to be delivered. He will already know the 12-or-so different areas where he’ll take the gear. Because Marcelino has run clinics all over Southeast Asia, he is well acquainted with the baseball scene in the Philippines. He is always on the lookout for communities with the potential to sustain an ongoing baseball program. Whether in remote areas where locals may have never seen a foreigner before, or a fishing village less than 10 minutes from Manila, Marcelino has started programs, hired coaches, leveled fields, and donated equipment so that baseball can live and breathe.

Just as important as the donating, is the opportunity to create a meaningful cultural exchange. Marcelino regularly brings teams of SAS boys and their families with him to the Philippines to play some ball, help distribute the donated items, and most of all to create an experience that will enrich both communities well beyond the length of their trip. On one such visit an SAS parent asked his host how long the boys would get to practice that day. He pointed to the two goats out in center field and explained, “We know it’s time to go home when the old lady comes to take her goats away.” Marcelino delights in this story because it epitomizes the cultural interchange that baseball has made possible.

Oscar Marcelino was born in the Philippines and lived there until the age of 15 when life under President Marcos became intolerable. He and his brother moved to America where his passion for baseball was fostered. Things were looking good for this serious young player at Brevard Jr. College in Florida when a rather large third base runner steamrolled over his leg leaving his foot pointing in the opposite direction. Thus ended his aspirations of playing major league ball. There was likely some dramatic disappointment that followed, but it was not long before the idea of coaching took root in his mind and so began a career that would take him to 32 countries, place him in dugouts with some of the world’s best players, and ultimately bring him to our very own SAS baseball diamond. 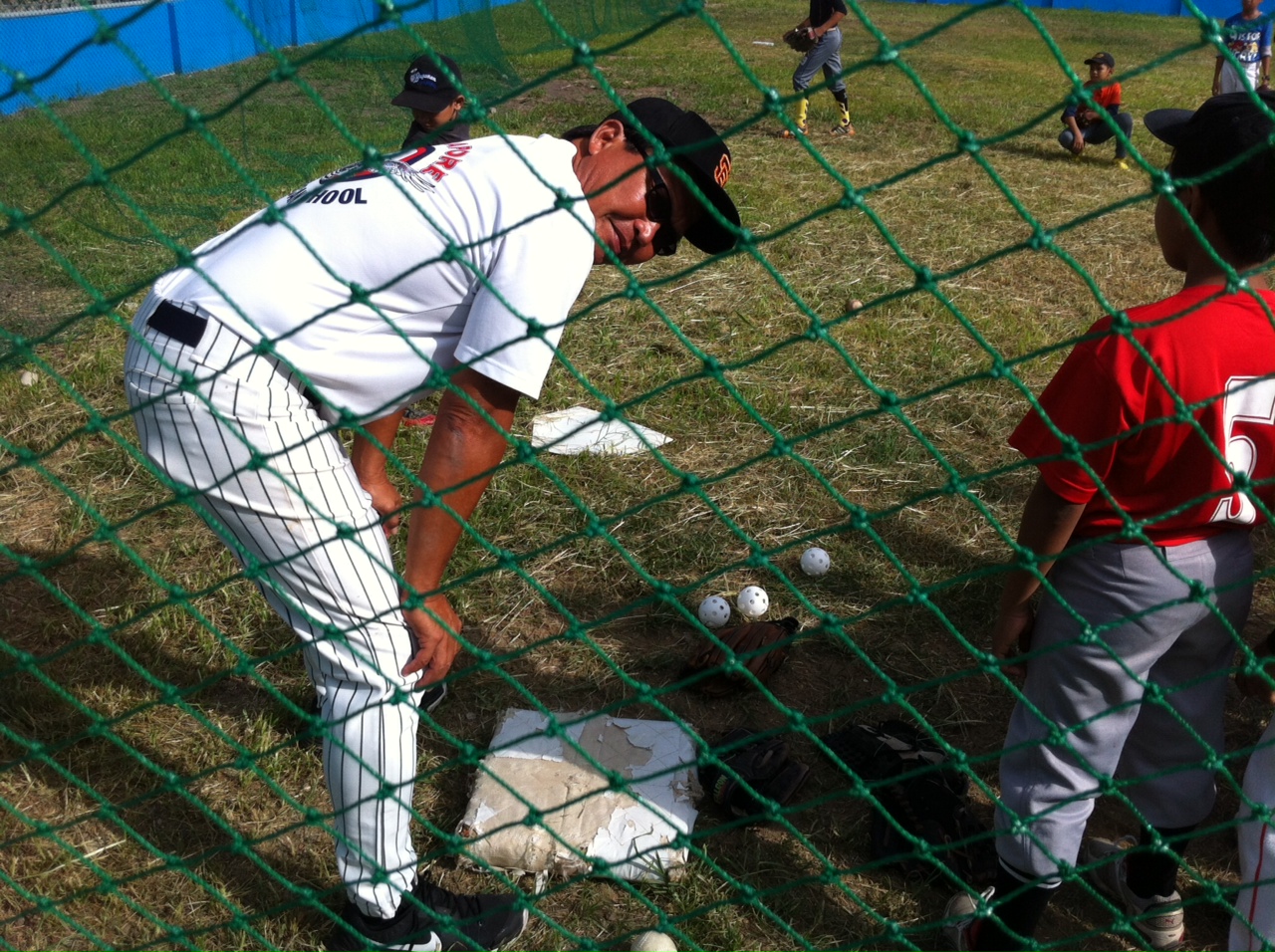 His advantage was that most people start coaching in their 30s, but because of his injury, he started learning a full 10 years earlier. He had more skill and experience to offer when Major League Baseball asked him to be their international envoy promoting baseball across Europe. This he did for 15 years and Marcelino can tell you about the successes of each kid he helped find a college, where the boy went on to play, whether he made it in baseball or business, how hard he worked to learn English, and definitely about the amount of heart he had.

Marcelino, whose son is the assistant coach at University of San Diego, will tell you, “If I coach your son, or if I coach a professional ballplayer…it’s all the same to me.” And you actually believe him. Until you remember that this man has coached the likes of Kris Bryant.

You may be thinking, wait a minute, the Kris Bryant? Third baseman for the World Series Champion Chicago Cubs and National League MVP?

Why yes! As well as four-time all star player, two-time world champion second-baseman for the Boston Red Sox, Dustin Pedroia! And despite this knowledge you somehow do believe him when he says he’s just as happy coaching your kid as any pro. 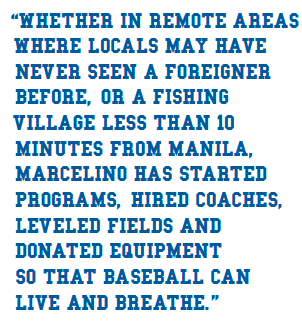 Though he is nowhere near retirement, he is starting to envision what he would like to leave behind. Inspired by outreach programs like Habitat for Humanity, Marcelino’s vision is to build a baseball field in that same small fishing village outside Alabang. He imagines our SAS boys helping out on service trips over time. “This is a good project for the kids. Let’s flatten out the ground one visit, dig the dugout next time, then we can put up a backstop until we have put something here that they won’t forget and that can help them continue to do this every year.” Alongside the field he would have a wall; a brick wall where every kid who worked on the field would have his name engraved. The SAS Memorial Wall. When I asked what he would name the field, he thought a minute and said, “Philippine American Friendship Field.”