Singapore American School, located in the northern Woodlands section of Singapore, is committed to providing each student with an exemplary American educational experience with an international perspective. Founded in 1956 as one of Singapore’s first foreign-system schools, what started with a hundred students in a colonial house has developed into a school of over 3,900 students on a 36-acre campus, the largest single-campus international school in the world. An independent, non-profit, co-educational day school, SAS offers an American-based curriculum for preschool through grade 12. The students come from fifty nations, and sixty-five percent hold US passports.

Singapore American School opened in January of 1956 in a Rochalie Drive colonial house that could accommodate around one hundred students. Originally intended as a school for the children of American businessmen, diplomats, and missionaries, it swiftly grew to include students from a much wider variety of backgrounds.

The increasing size and instructional requirements of the school necessitated several moves over the next fifty years:

The Singapore government offered SAS the choice of three sites for a new campus, and the school chose a 15-hectare (36-acre) plot in the developing Woodlands area. The school was given a 90-year lease, and the agreement stipulated that the new campus accommodate up to 3,700 students, a limit many Americans felt was unlikely to be met. A new campus costing $150 million was constructed. Within six years, rising enrollment necessitated the redevelopment of part of the campus into a new high school and an Early Childhood Center, which opened in 2004.

Now in its nineteenth year of operation, the Woodlands SAS campus has proven an economic, social, and cultural asset to the Woodlands community. With nearly 4,000 students, the school is a major employer, hiring professional and administrative staff, as well as housekeepers, guards, groundskeepers, and food service workers. Around 14 percent of SAS families live near the school, evenue to the district through rentals, purchases, and employment of service providers. With the Woodlands Regional Centre being one of the areas slated for development in the government’s latest Land Use Plan, we anticipate that SAS will continue to be one of the prominent anchor institutions in the area. 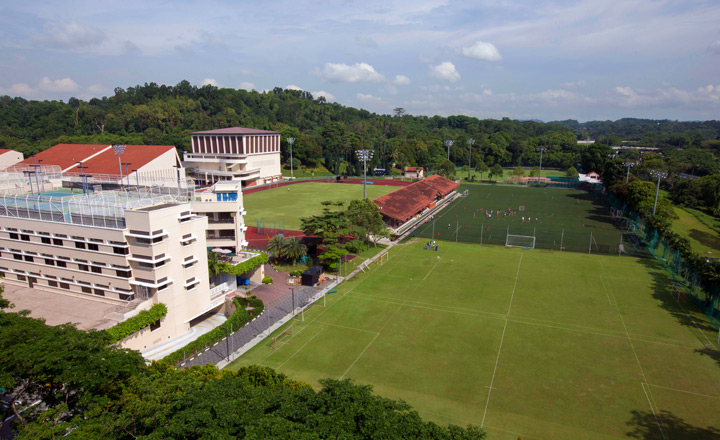 At Singapore American School, employees from many different places work side by side. The percentages of Singaporeans, Americans, and other nationalities on the staff vary from year to year, but the professionalism, cooperation, and respect shown to each other and to students remain constant.

From the school’s beginnings, Singaporeans have made up a large, stable, and valued portion of the school’s professional and support stafed by SAS were Singaporeans, and over the years, many of the longest-serving teachers, instructional assistants, and support staff have been locals. These individuals provide continuity and institutional memory even as foreign students and staff come and go. Their contributions to the school are deeply appreciated.

*While most of these indirect employees are Singaporeans, some may be PRs or foreign workers. Our records do not specify all nationalities.

The many foreigners employed by SAS also contribute significantly to the local and and national community. Whether they stay a few years of a few decades, the unique opportunities they find in Singapore make their SAS sojourn a memorable one. Births, marriages, friendships, and unique experiences make many foreign employees of SAS feel that Singapore is truly a second home for them.

Number of foreign teachers, administrators, and other staff: 438, from 22 different countries:

2014 Financial Contributions to Singapore by SAS and Its Staff 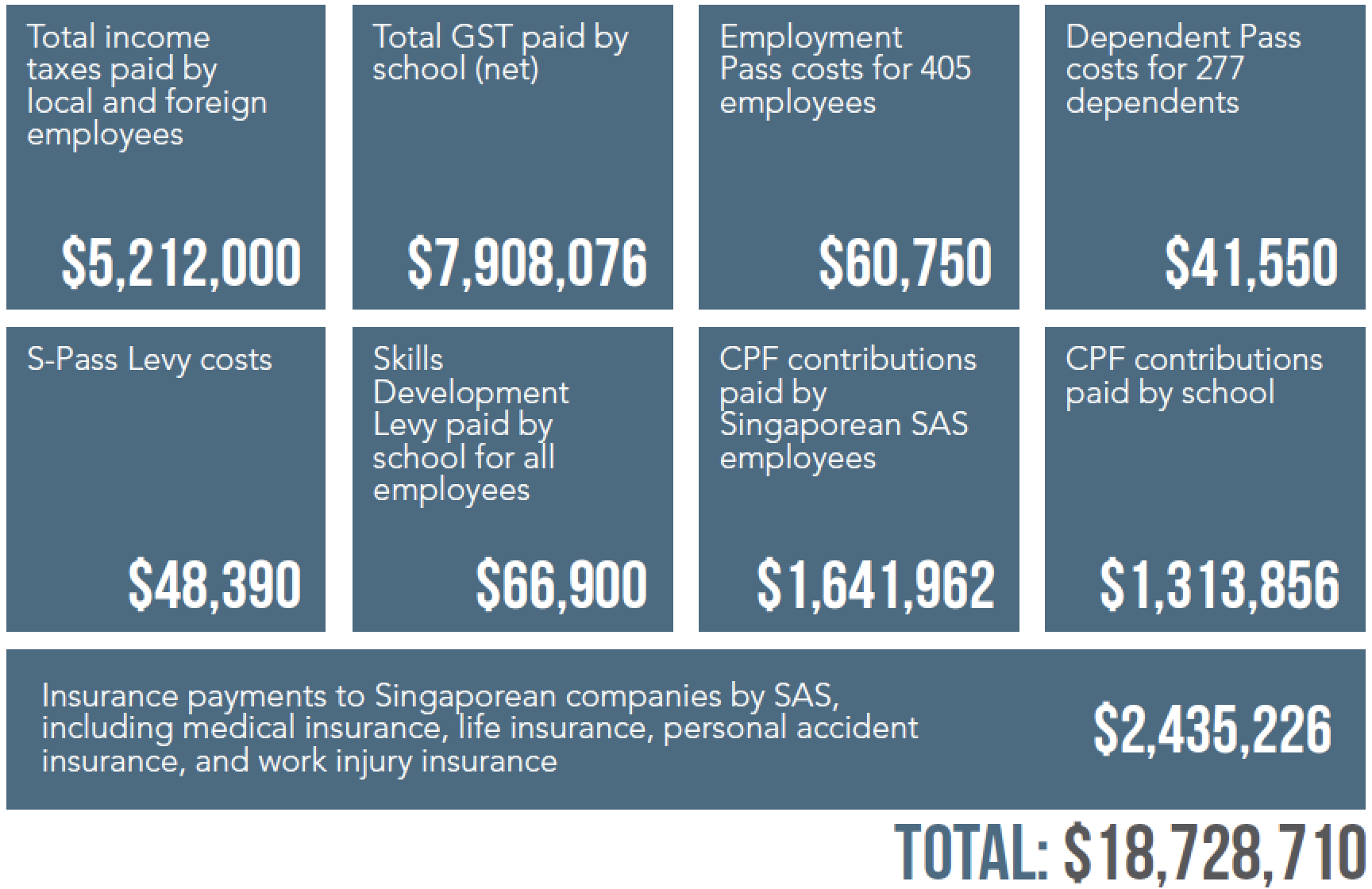 SAS is one of the “anchor businesses” in the Woodlands region. With around 14 percent of school families choosing to live nearby, the area around SAS is sometimes called the “Little America” of Singapore. In fact, the neighborhood is very diverse, with American families living alongside Singaporean families and families from many other places. With support from Mr Ong Teng Koon, member of parliament for the district which the school is located in, SAS seeks to be a good neighbor and to celebrate all members of the Woodlands community in its activities.

Economic Effects of SAS on the Woodlands

339 SAS families live in the Woodlands and Sembawang arevenue through their needs and activities. Spending in the neighborhood includes rental payments, food shopping, payments to service providers, and dining, leisure, and recreation costs. We estimate that each family spends between $72,000 and and $264,000 each year on these items, giving us a total of between $24.4 million and $89.5 million spent in the surrounding neighborhoods.

Partnering with the People’s Association

During 2014, SAS and the Woodlands People’s Association supported each other in a number of ways:

SAS as a Community Resource

Beyond the Woodlands neighborhood and area, SAS supports the general Singapore economy and government through its payments to direct and indirect employees, payments of taxes and levies, pure. SAS also helps to attract international companies and expatriate employees to Singapore.

Financial Impact of SAS on Singapore, 2014

Since the early 1960s, SAS has been hosting international sporting tournaments. During 2014, five different international tournaments took place at SAS, bringing over 800 visitors to Singapore for two- to four- day stays. The financial impact of these visitors included hotel bookings, transportation costs, meals, entertainment, and souvenirs. Besides the 840 official participants, some athletes' family members also come to Singapore to support the team.

SAS welcomes many teams from non-Singaporean international schools who want to consult with and learn from us. We estimate that each year we host around twenty overseas trips for educators. With an average of four participants per trip, and an average stay of three nights, this means that SAS is one reason for 240 days of international educators’ visits to the country.

SAS students also made excursions to sites that do not require tickets. Students, teachers, and chaperones purchased souvenirs, bought meals, made donations, and embraced sites’ missions. Most excursions included around 350 children and adults. Destinations included:

SAS is a Major Factor in Expatriate Families Choosing Singapore

As an established and highly regarded international school, SAS draws families to Singapore. Parents considering a move to the region work with their companies’ HR departments and network with others in similar circumstances for school recommendation; both American and other families find SAS attractive due to its strong academic program, extensive extracurriculars, excellent facilities, and professional, caring faculty and staff. Around half of our nearly 4,000 students are sponsored by the companies that relocated their parents overseas.

Companies that sponsored SAS students during 2014 include:

When asked, many SAS families point to SAS as a significant factor in their choice of Singapore as a temporary residence. We are proud to know that we indirectly contribute to the economic well-being of the country in this way. Our 2,521 separate SAS families rent or buy property, acquire vehicles, pay for food and other necessities, hire service providers, and spend on dining, leisure, and recreation activities. We estimate that each family spends between $6,000 and $22,000 each month on these items, giving us a monthly estimate of between $15 million and $55 million spent in Singapore by SAS families.

Singapore American School extends its influence in many positive ways outside its gates, Since 1960s, when SAS students began volunteering in St. Andrews Hospital for Children, service learning has become an essential element in our students’ development as caring world citizens. Students serve in many ways, whether through being “buddies” with local schoolchildren, going on grade-level service trips, or joining a service club after school.

SAS High School Students Participate in Over 50 Clubs and Organizations Dedicated to Helping Poor, Disadvantaged, Ill, or Disabled Children and Adults in Singapore, Asia, and Beyond

SAS Faculty, Staff, and Parents Dedicate Many Hours to Local and Regional Charities

Some of the organizations most supported by SAS’s adult community include:

The SAS Community is Quick to Help in Times of Trouble

Teachers everywhere love to learn from each other. We at SAS feel extremely fortunate to be part of Singapore’s vibrant and innovative education scene. Through informal exchanges, hosting opportunities, networking opportunities, and professional conferences, SAS seeks to contribute to and learn from this exciting community. Our graduates also contribute to higher education in Singapore, and those with National Service responsibilities fulfill them.

SAS Contributes to the Professional Development of Teachers in Singapore

SAS was a founding member of the ACSIS League, which now provides inter-school sporting opportunities for students in over 25 international schools in Singapore and Johor, Malaysia. This league helps make Singapore an attractive location for expatriate families with school-age children.

SAS has developed a strong commitment to the Global Issues Network, which encourages young people to “think globally, act locally” and use their energy and creativity to solve pressing global problems. In 2014, the SAS GIN Club:

Each year, Singaporean SAS graduates fulfill their NS responsibility. Our records indicate the following numbers of current National Servicemen, with year of entry in parentheses:

In keeping with two of our core values which are responsibility and respect, SAS puts environmental stewardship at the heart of its efforts to be a good community member. Students and staff at all levels are encouraged to get involved in making the school environmentally responsible, and lessons learned in various classes and activities foster respect for our environment. Each of the following initiatives not only makes an environmental difference in itself, but also is used as a living laboratory for students to learn about sustainable living.

Emphasis on Reduce, Reuse, and Recycle

SAS values the 2014 learning experiences made possible for students and staff by the following:

Through its student trips, exchanges, and outreach efforts, SAS presents a positive image of Singapore to the rest of the world. Students, teachers, and parents appreciate the exciting, friendly, safe, and efficient, and they communicate their affection for Singapore in all sorts of ways. Through them, the wider world learns more about a small but impressive country that all can respect and learn from.

Our students come from around 50 countries, and communicate with relatives and friends back home about their experiences in Singapore.

The Interscholastic Association of Southeast Asian Schools (IASAS) links SAS, and Singapore, to five sister schools in the region with similar histories and philosophies. During sports and cultural exchanges, thousands of families in the region learn from participants about their host countries.

The SAS Alumni Office works to keep alumni in touch with the events and developments at the school and with Singapore. Each year some alumni return to the school for visits, or get together with other SAS friends at events overseas. In 2014, alumni events included:

SAS Students and Families Return to Singapore for Work and Travel

We hear from many SAS alumni who actively seek to include Singapore in their further life experiences. Some move back to Singapore permanently, while others look for work that will bring them here or propose assignments to their current companies. We have four staff members who are SAS alumni, and 33 students whose parents attended SAS. We walked and ran during our annual second grade walk-a-thon and our 287 students secured over $47,000 to donate to Food from the Heart, a local food distribution charity . We were hot, we were sweaty – but we were smiling, knowing that we were helping our local community. In the words of several second graders, "We are stomping out hunger!"